Everett and Jones Barbeque
Looking for an agent/publisher for a proposed new barbeque book from a Black woman's perspective 50 years in the game. 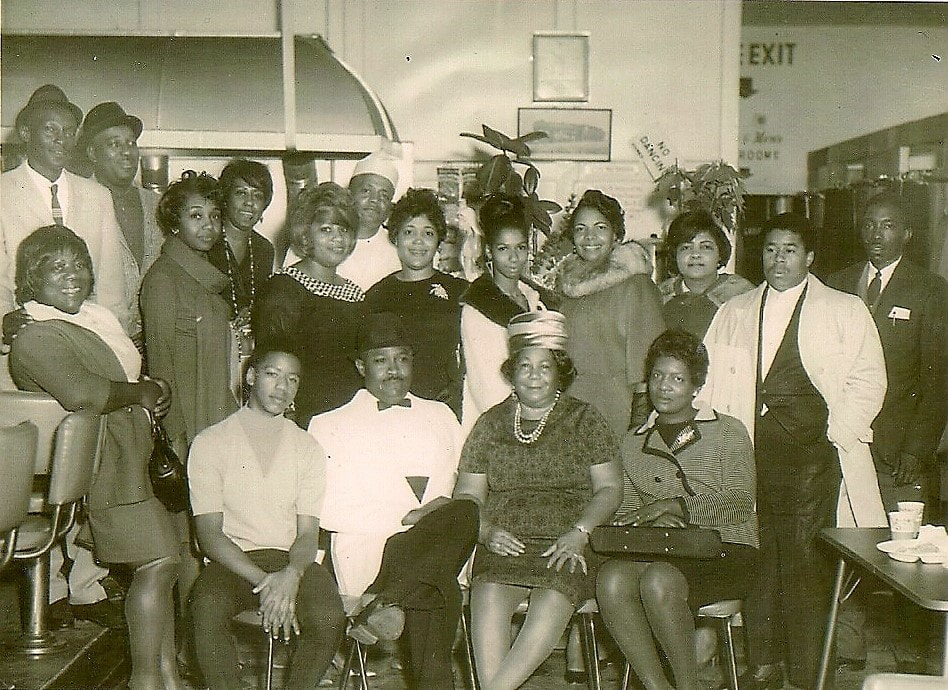 (Seated) Rev. Memphis Jenkins, son Barry, Mrs. Jenkins, Dorothy Everett and employees of Jenkins Bar-B-Que on 7th Street - circa 1968
The African American roots of Oakland-style barbeque have deep cultural connections to West Oakland’s famous and historic 7th Street.  If Streets could talk, West Oakland’s historic 7th Street would tell the story of Barbeque, Blues, Black Power and urban removal.  If a street can give barbeque a flavor then the secret sauce for Oakland style barbeque was 7th Street.

Blues was the music they played on 7th Street and barbeque was the food they ate.  Oakland-style barbeque is the Blues.  Just like the Blues, American barbeque was birthed out of hard times on slave plantations, and is the pride and grit of the Black Power in the late 1960's.  7th Street to Oakland was what Beal Street is to Memphis.  People went there to eat and be entertained.  www.westcoastbluessociety.org/ 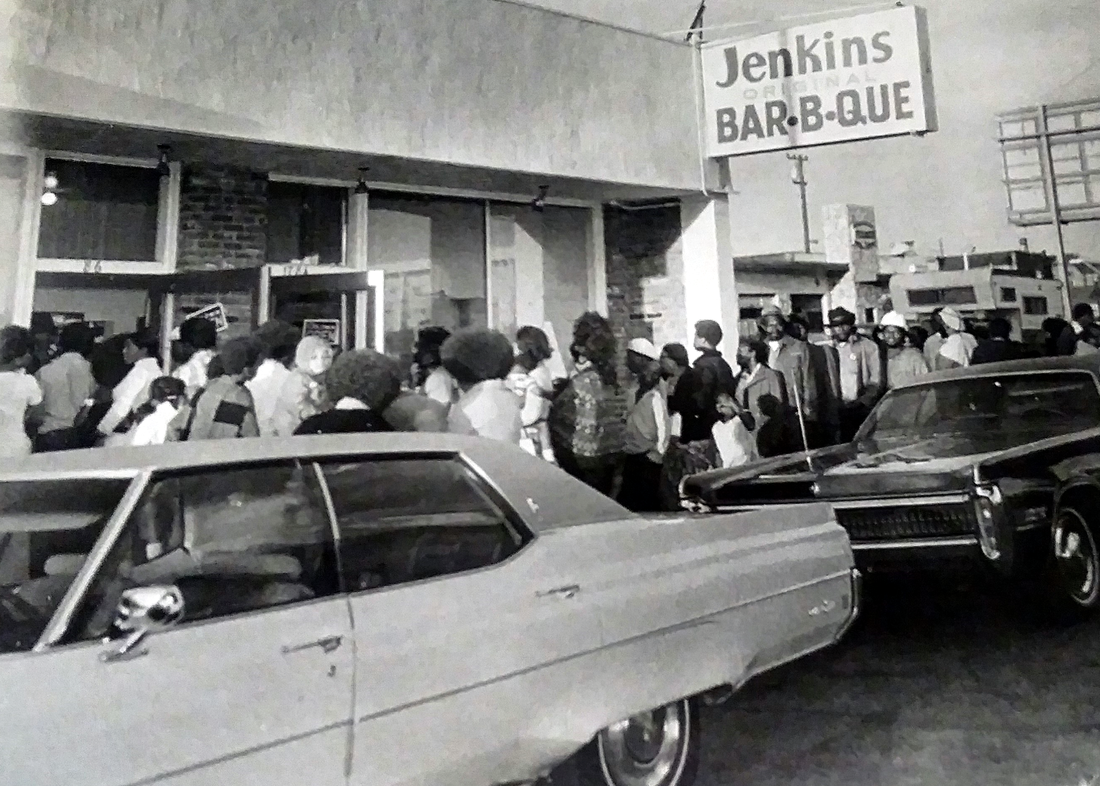 ​In the 1940's, 50’s and early 60s Slim Jenkins' Supper Club made 7th Street the Harlem of the West-home of West Coast blues, and Jenkins Original Bar-B-Que in the 1960’s helped define a barbeque culture and dynasty that could rival any barbeque city in America today. The Black Panther Partycreated a national black power movement that gave all power to the people.

The combination of all three-BBQ-Blues and a revolutionary created the smoky, charred, robust flavor which Oakland-style barbeque is known.  Not only is it unique to its location, but it defines a culture.  Still today it captures the hard work, funky groove and passion of 7th street.

Before urban removal swept through the Black community, barbeque could be found 24 hours a day, 7 days a week.  Before the Cypress Freeway cut the neighborhood in half; before the U.S. Post Office demolished nearly 500 homes with a World War II surplus tank clearing 20-acres of land and destroying the customer base; before the Bay Area Rapid Transit (Bart) wiped out the remaining commercial street, 7th Street was lined on both sides with barbeque joints.  Earle’s Famous Bar-B-Que was at 1483, Burk’s Seafood & Barbeque at 1479, Singer’s Bar-B-Q at 1496, Jenkins Original Bar-B-Que at 1541,  Crissie’s Barbeque Pit at 1546, and Fields Bar None Bar-B-Q at 1612. 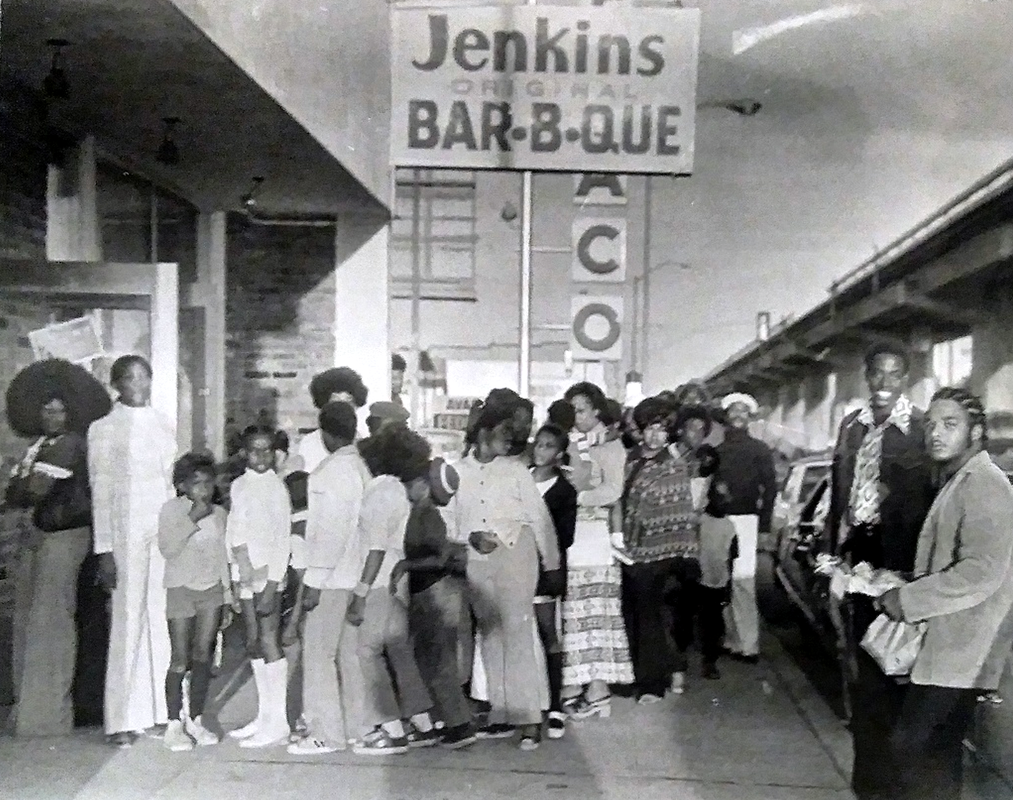 ​During this time, 7th Street was filled with smoke, afros, leather trench coats, bell-bottom jeans, loud music and sharp cars.  The smell in the air was of meat smokin.’   The sound of music blaring from clubs and jukeboxes was the Blues. The ladies of the night, with young sailors draped on their arms, worked on one end of the street while BBQ joints were smokin’ on the other.

​The original Jenkins Bar-B-Que, located on the corner of Henry and 7th Street, was torn down to make way for Bart, so Jenkins moved across the Street to 1660 7th Street.  Jenkins Bar-B-Que stayed open 24/7 operating 3 shifts, with lines out the door constantly.  Jenkins offered take-out service; sit down dining and private dining booths in the back.  Jenkins was the first barbeque restaurant to attract a diverse customer base.  Jenkins took barbeque to the next level. 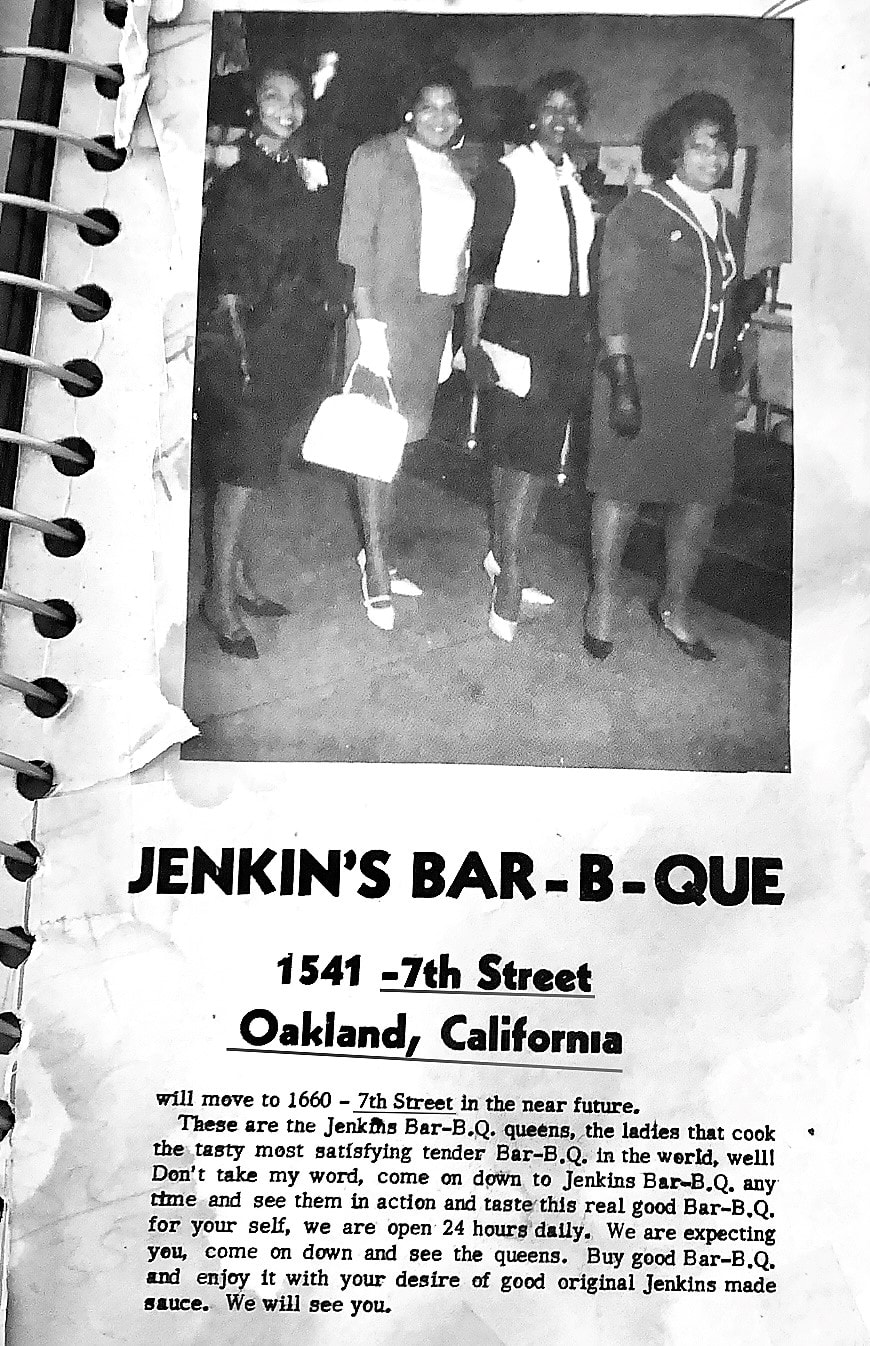 My Aunt Nervia Everett in the black skirt and white shoes
Jenkins Original Bar-B-Que was owned and operated by Reverend Memphis Jenkins, the pastor of our church, King Chapel Missionary Baptist Church, located across the street from Defremery Park in a Victorian-style home on Peralta Street in West Oakland.  My dad, Reverend Cleveland Everett, founded King Chapel Missionary Baptist Church before Reverend Jenkins took over, and my mom, Dorothy Everett, was the church’s First Lady.  Rev. Jenkins treated my mom like his daughter.

Dorothy Everett and her co-workers @ Jenkins Bar-B-Que on 7th Street, West Oakland - circa 1968
Many of my family members worked at Jenkins.  My mother was a cook, and my brother George, sister Annie, three cousins, two aunts Nearvie and Polly, and I all worked at Jenkins’. My Aunt Nearvie tells the story of how her husband, Uncle J.C, a deacon in the church, had words with Reverend Jenkins one Sunday after service.  Someone did not show up for work at the restaurant and Reverend Jenkins wanted Aunt Nearvie to go in and work the shift. Well, Uncle J.C. didn't want her to go to work and blew up at Reverend Jenkins and Uncle J.C never stepping foot in Jenkins again.

I remember going to work at Jenkins with my mom on the weekends.   At the age of 13, I was only allowed to make the potato salad and season the meat that came in daily-20 cases of ribs, 10 cases of beef briskets, 10 cases of chicken. My brother's job was to stack all of the oak wood delivered to the restaurant.  There was always a lot of work to do because the place stayed busy.  It was weird to see and hear Rev. Jenkins, this big imposing man with a big voice, preach the gospel at church on Sunday in his suit and tie and later see him dressed down in all white, shirts, pants, apron and a paper hat at the restaurant giving orders and helping to serve hundreds of customers. He taught us a lot about the running of a barbeque business.

I remember his huge brick pit inside the restaurant that lined one wall. It was always spitting out heat and chars of wood.  We had to be careful, wearing our flammable black nylon uniforms and aprons, not to get too close to the fire.  I remember in the center of the serving area was a big old oak chopping block. It had 4 legs and would make a loud whack sound as the meat cleaver hit it. Whack! Whack! Whack! The electric fans were whirling overhead trying to cool down the place from the overwhelming heat produced from the customers packed inside and the fire-burning pit; you could lose 10 pounds in water weight before your shift ended.

When you work in a barbeque restaurant with an indoor wood burning pit the smell clings to you.  You smelled of fire, meat, wood and BBQ sauce every day after your shift.  You reeked of it; it clung to your hair, clothes and shoes.  We used to joke that it takes a special person to date or marry someone who works in a barbeque pit, but we worked hard while the jukebox blasted West Coast blues. ​​
Lowell Fulson was the most important figure in West Coast Blues in the 1940s and 1950s.
Blues on 7th Street Playlist
​With the destruction of the once vibrant African American community in West Oakland we moved into East Oakland and Jenkins followed. He opened on 82nd Avenue and East 14th Street.  My mother eventually left Jenkins and later partnered with Willie Flintroy to lay the foundation for the first Flint’s Bar-B-Q restaurant at 66th Avenue and East 14th Street.  Flint’s would become a powerhouse in Oakland’s barbeque culture. With mom’s cooking skills and recipes Flint’s dominated the Barbeque scene for many years, and when he died my mom decided it was time to open her own barbeque restaurant.

With her nine kids as her workforce, many years of experience with Reverend Jenkins and Mr. Flintroy, she was confident she could do it. My mother took an old condemned building on the corner of 92nd Avenue and East 14th Street, renovated it and in 1973 the first Everett and Jones Barbeque was born at 9211 East 14th Street in Oakland. Next door was the East Bay Dragons-the first all-black, all-Harley, all-chopper motorcycle club in Oakland.  The East Bay Dragons are one of the oldest (1959) remaining black motorcycle clubs in California; and are still our brothers.
​
Everett and Jones Barbeque is committed to honoring the traditions and legacy of West Oakland’s historic 7th Street barbeque culture.  Fun fact: Reverend Memphis Jenkins owner of Jenkins Barbeque and Harold “Slim” Jenkins, owner of the famous Slim Jenkins Supper Club-the street’s favorite night club at 1748 7th Street- were not related, but both were from Louisiana.  Huey P. Newton, co-founder of the Black Panther Party was also born in Louisiana, but moved to West Oakland as a kid.   All three men- a night club owner, a preacher and a revolutionary, all from Louisiana raised the visibility and fame of West Oakland’s historic African American community on 7th Street to the national level.

From its historic beginning on 7th Street in West Oakland, the secret recipe for Oakland-style barbeque is this: take a southern, restaurant-owning pastor, a preacher’s wife, some traditional African-American southern soul food, add some West Coast Blues, mix in a Black Power Movement, season it with the scars from urban removal, mix it all together, smoke it over oak wood inside a mason-built brick pit; add a sweet, spicy tomato-base barbeque sauce and there you have it.  It’s Hella Bay!