Looking for an agent/publisher for a proposed new barbeque book from a Black woman's perspective 50 years in the game. 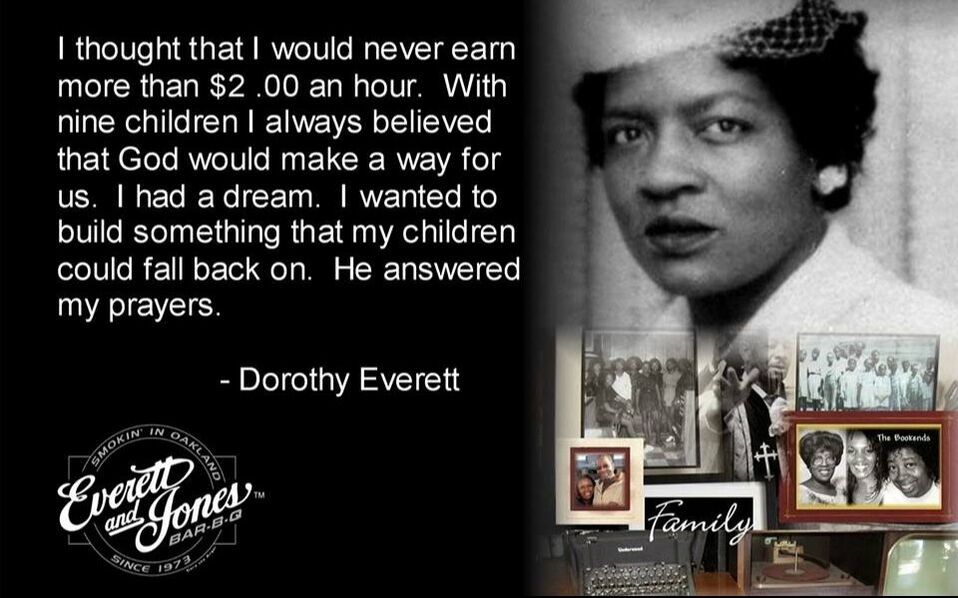 The late Dorothy T. Everett was born Dorothy Turner on July 28, 1931, in rural Choctaw County, Alabama.  Dorothy worked as a domestic cleaning house in Alabama until, as part of the second wave of African Americans leaving the segregated south looking for a better life, migrated to Oakland, California in 1952, with her husband the late Reverend Cleveland A. Everett, and three young daughters.

Dorothy’s first job in California was cleaning house in the city of San Leandro.  Dorothy later worked at Wolf’s Records in West Oakland selling popular black records-they were called "race records" back then to the growing Black population in West Oakland.  Dorothy also worked as a waitress at the Continental Club on 12th Street in West Oakland, where she saw legendary Blues performers live, and as a cook at the Original Jenkins Bar-B-Q on historic 7th Street in West Oakland.  To read more about West Oakland's famous and historic 7th Street BBQ and Blues Legacy, go to link  www.everettandjones.com/7th-street-barbeque-legacy.html
In 1973, Dorothy now a divorced mother raising eight daughters and one son opened her first restaurant in Oakland out of a sense of need.  With $700 dollars that she had saved, a sign bought by Cora “THE ANGEL,” her best friend, fifty dollars to make a till (also from Cora) and a week’s line of credit from Harry Mock of Fair Deal Market, Dorothy went into the barbeque business heavily dependent upon the Lord.  An old condemned building on the corner of 92nd Avenue and East 14th Street in Oakland, in much need of repair and next door to the East Bay Dragon’s motorcycle club, was rented and the whole family joined in the repairs. 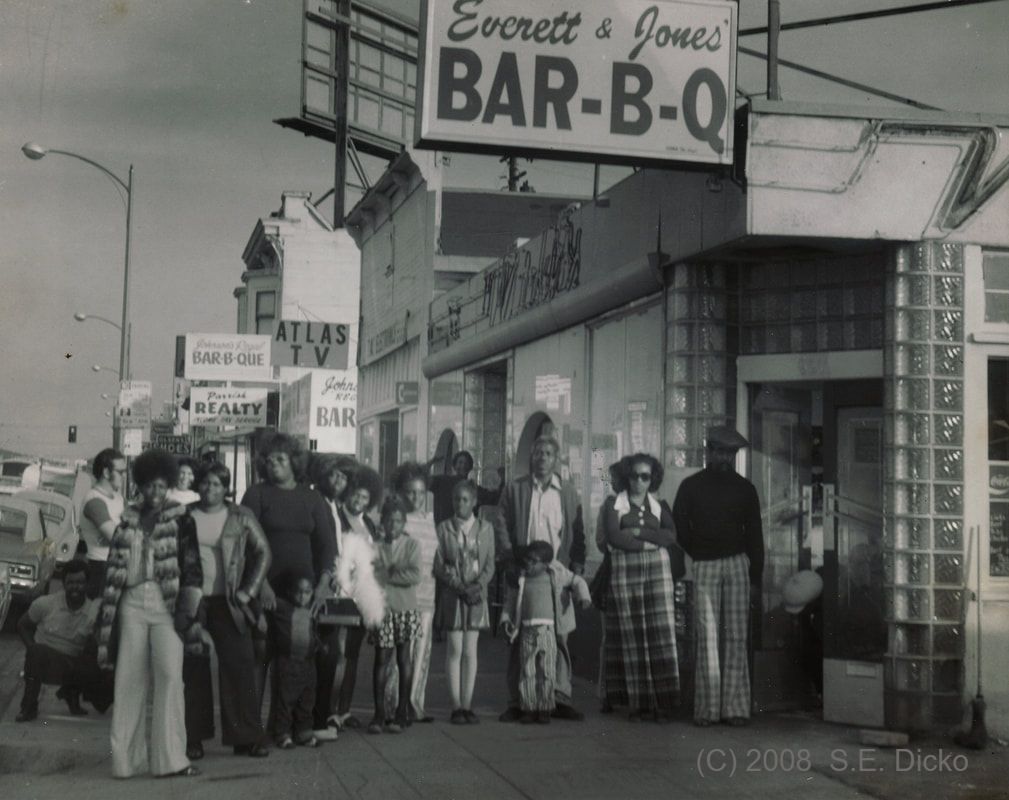 1st Everett and Jones Barbeque restaurant @ 9211 East 14th Street Oakland, California -1973
The Everett’s decided to name the new restaurant Everett and Jones Barbeque, Annie was the only daughter married at the time to James Jones a later partner in the business, continuing a tradition of keeping it all in the family that continues today.  With little money for advertising, the family depended on word of mouth for customers.  The family passed out fliers and gave out free samples to local bars and businesses.  Slowly the business began to grow.  The long hours and low pay (sometimes no pay) began to pay off.  In 1974 the family opened their second restaurant at 1955 San Pablo Avenue in Berkeley, California and in 1975; the family opened their third restaurant at 2676 Fruitvale Avenue in Oakland.
While celebrating the third anniversary of their first restaurant, tragedy struck. The unattended wood burning pit caught on fire and burned the restaurant beyond repair.  Standing in front of the burning building, still in their party dresses, the family hugged each other and cried.  A year later in 1977 the family opened a new restaurant one block away from the original location at 9101 East 14th Street.
​In May 1979, the first of many critical acclaim honors were bestowed on the family by local and national newspapers, magazines and food critics.  The 1979 cover story on barbecue in New West magazine, written by noted food and travel author Charlie Haas proclaimed Everett and Jones Barbeque the best barbeque in California.  He went on to say “When I die, if I have been very good, I will be consigned for eternity to a branch of Everett & Jones’ Barbeque.  This demi-chain sets the standard against which other East bay ‘que must be judged-against which all other ‘que must be judged.  The rib-and-link combo, a good-sized meal, cost $4.79.  These may be the six least elaborately appointed restaurants of any kind in California.  They are also six of the best.” 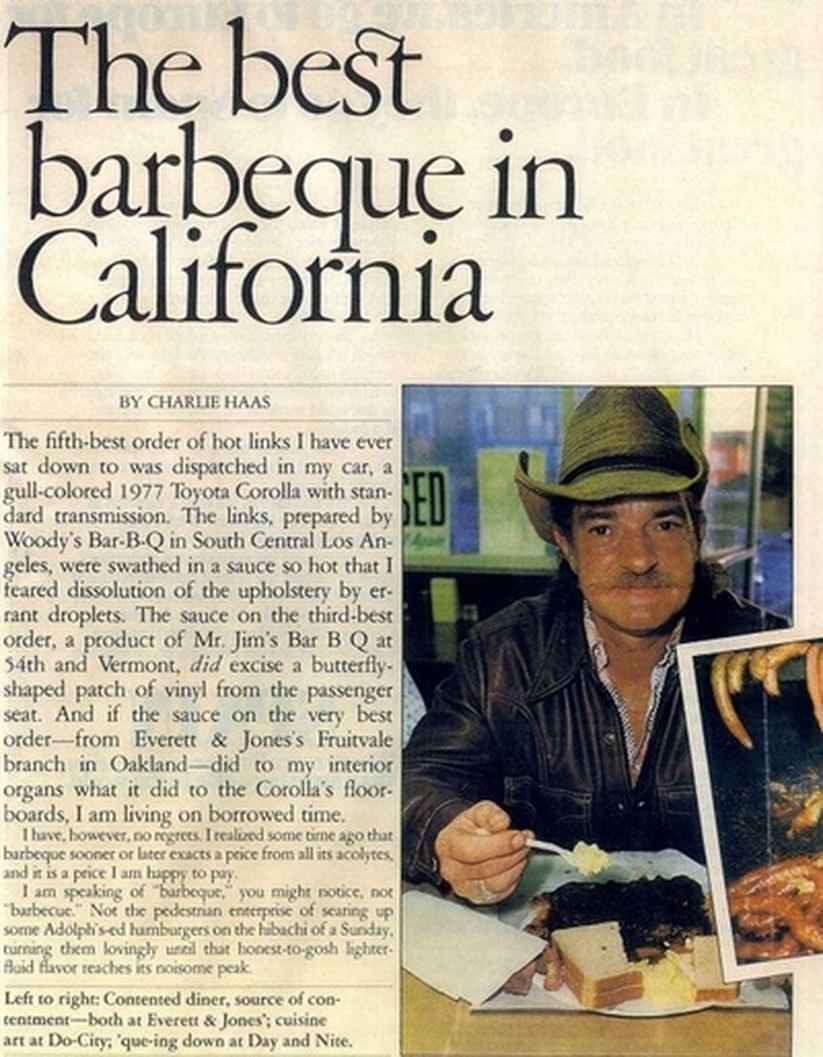 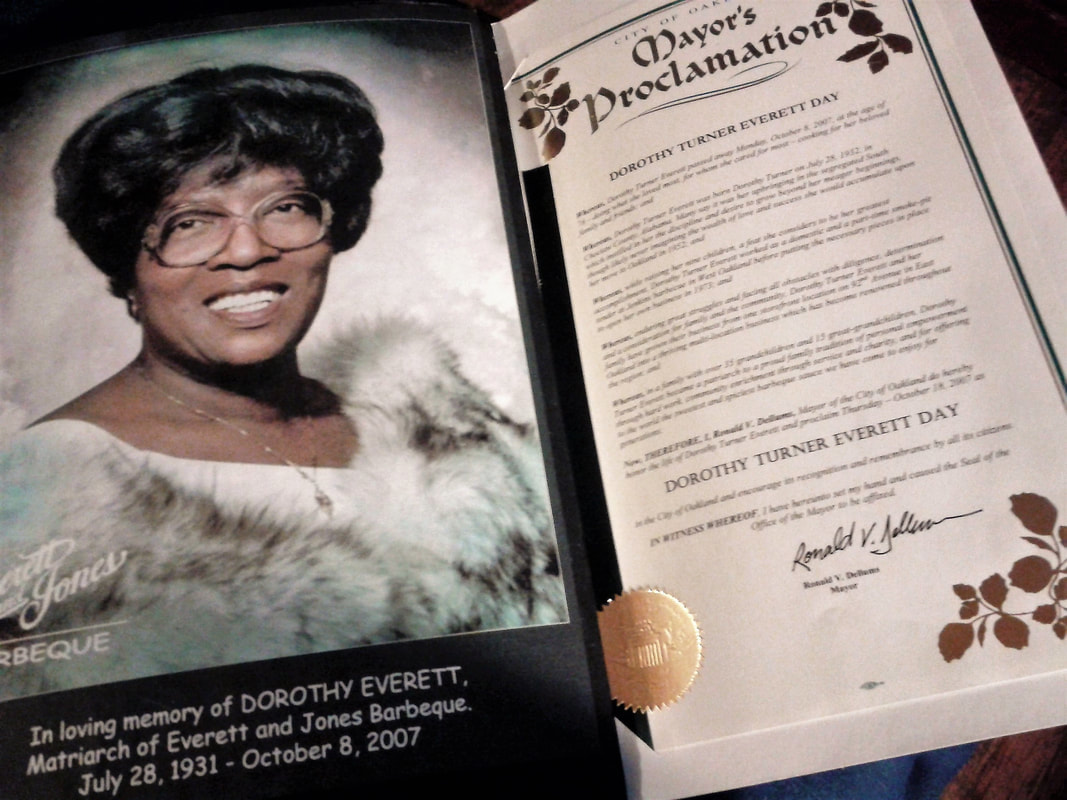 In October of 2007, while cooking food to take over to her best friend of forty eight years Cora "THE ANGEL," whose daughter Terrie had suddenly died four days earlier, Dorothy collapsed and died.  Today, Dorothy's grandchildren are moving into positions of leadership to see the business into the future.  The stage had been set for nearly five decades of growth and prosperity.  Dorothy Turner Everett's vision and hard work had given her the means to provide for her growing family.  Dorothy's legacy and dream will live on thanks to her family and you: the best customers ever!
Dorothy Turner Everett said "I thought that I would never earn more than $2.00 dollars an hour.  With nine children I always believed that God would make a way for us.  I had a dream.  I wanted to build something that my children could fall back on.  He answered my prayers." 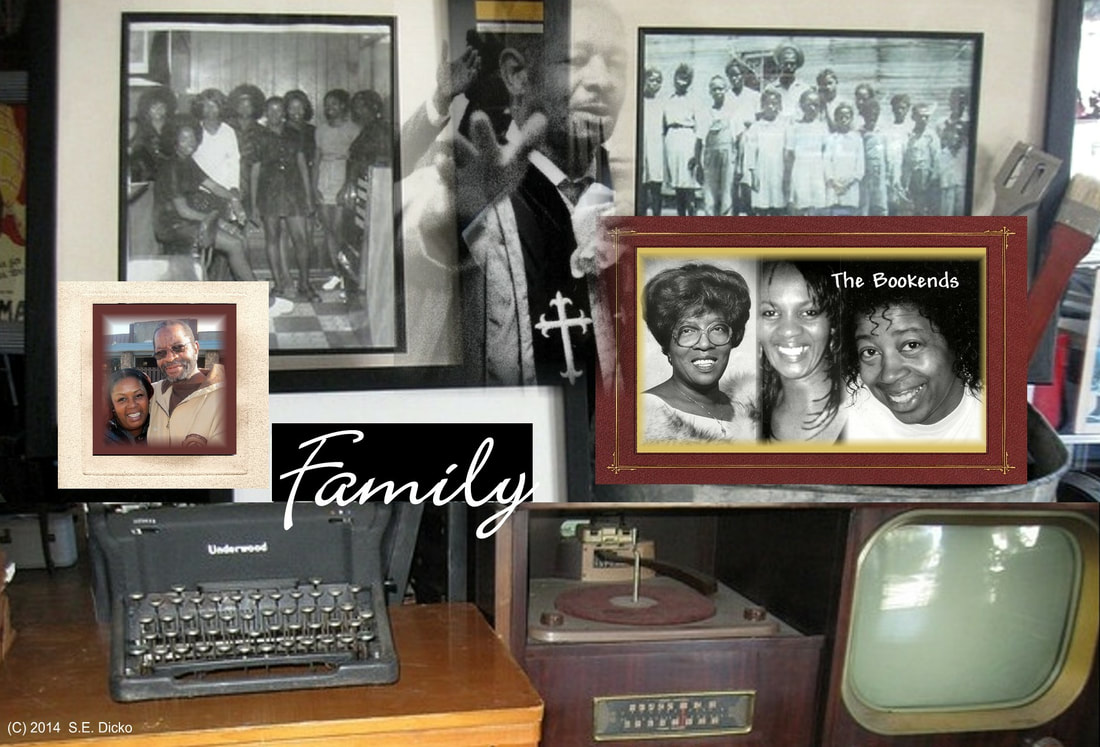 In loving memory of our beloved mother and sisters Angie, Virginia, Yolanda, Dorothy Jr and Mary.  We miss you and you will be forever in our hearts.  We are holding down the fort. 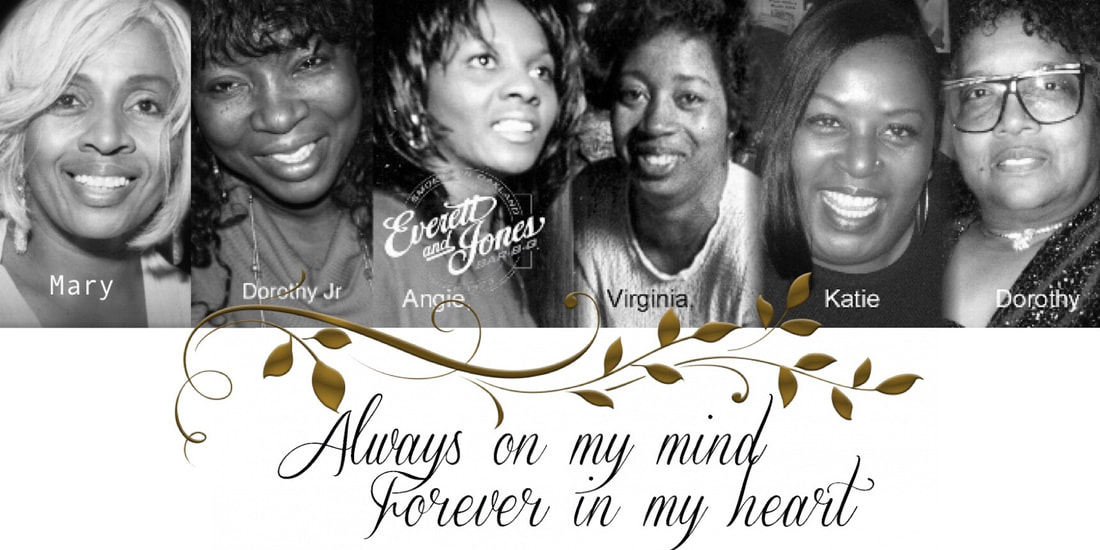 2021 was a tough year for our family we lost two Everett sisters Dorothy and Mary. 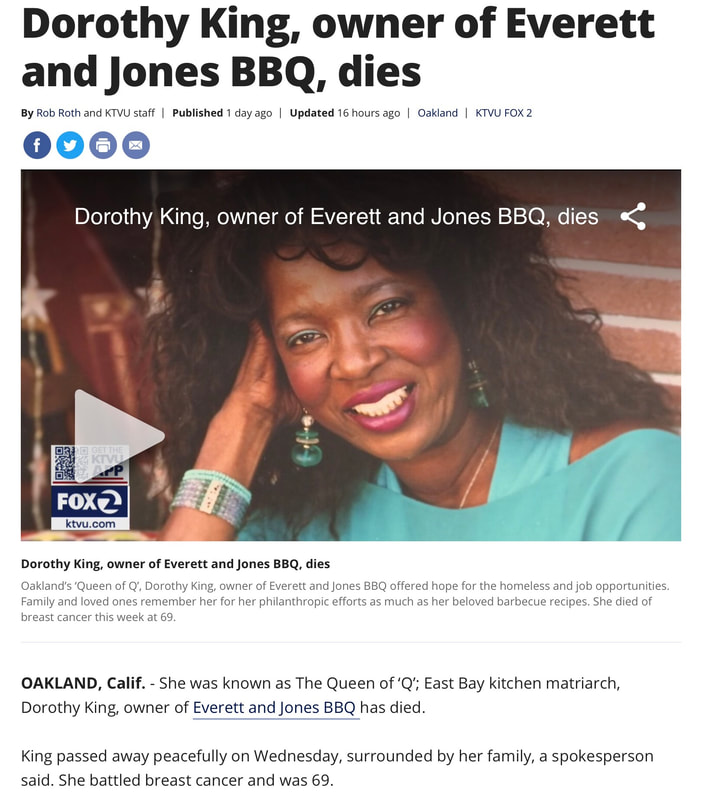 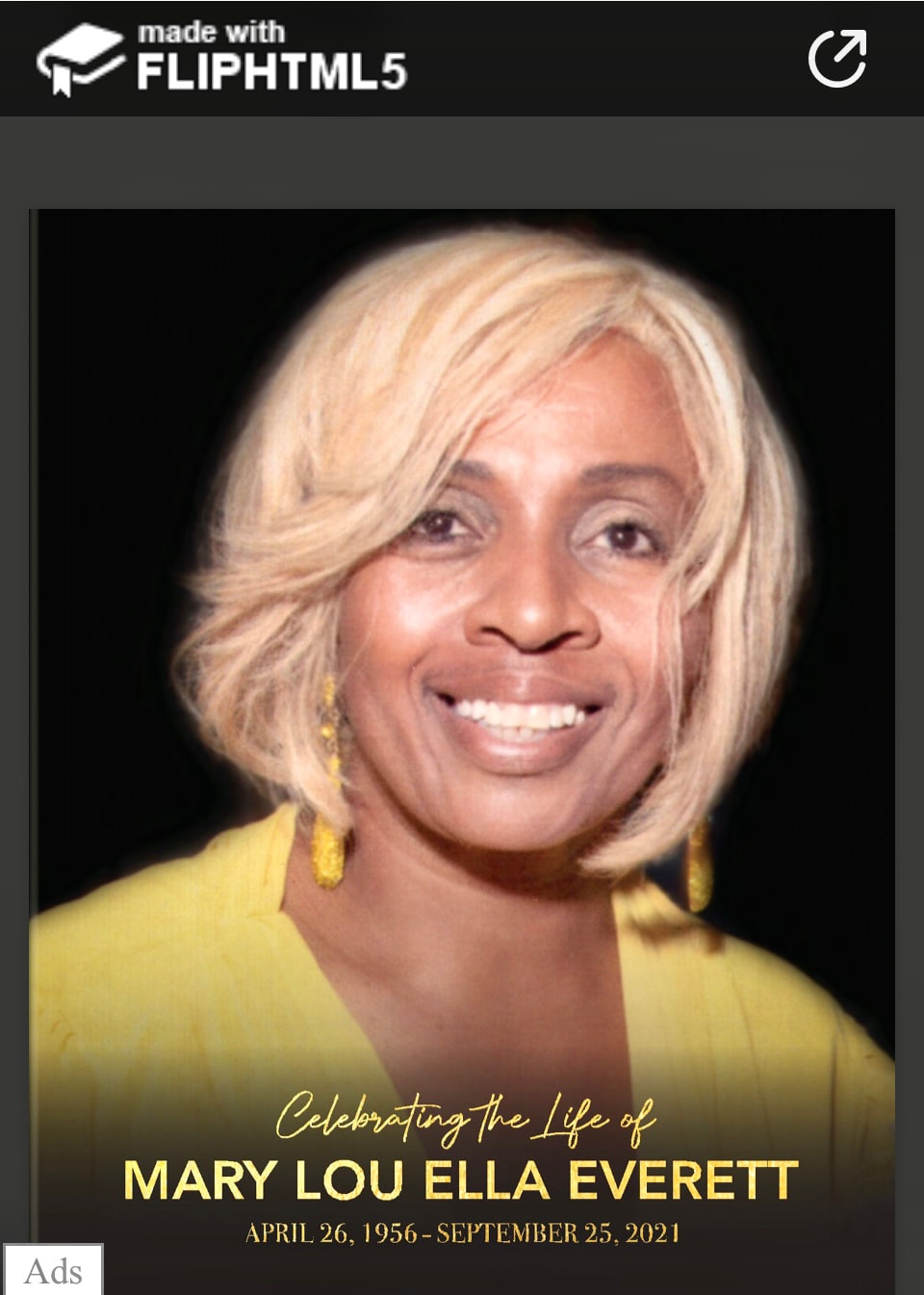